This kosher recipe for Slow Cooker London Broil is a quick and easy way to make a super tasty meal without much fuss. The tender cut of beef sits in the slow cooker and breaks down into a flavorful lunch or dinner. Perfect recipe to make in a Crock Pot for Shabbat or Yom Tov. This recipe with London Broil recipe is kosher, gluten free, and non-dairy.

London Broil Roast is one of those cuts of meat that can be super tasty or fork tender. It all depends on how you cook it. Grilling London Broil and cooking London Broil in the oven are some of the ways that can make really delicious recipes. After trying this recipe, you may think that the slow cooker is the best way to cook London Broil.

Why This Recipe Works

Some of the things we love about this dish are that it is:

Sprinkle salt and pepper over all surfaces of your roast. Over a medium/high flame sear all sides of the meat for about 2 minutes on each side. You are just looking for a golden brown crust and not to cook the meat all the way through.

Step 2 - Load up the slow cooker

Cut the onions into 8-10 pieces each and toss them into the bottom of the slow cooker. Place the garlic cloves in whole and then place the seared London Broil roast on top.

In a separate bowl, whisk together the wine, one cup chicken broth or one cup beef broth, Worcestershire sauce, and thyme sprigs. (If you have some of our Shabbat Chicken Soup, that is perfect to use for the broth in this recipe). Pour over the meat in the slow cooker and set to low for 8 hours. If you are making this for Shabbat or Yom Tov lunch, the slow cooker can stay on warm until ready to serve.

What is a London Broil?

London Broil is a way of preparing a meat recipe and does not refer to the cut of meat. That being said, most kosher markets will sell cuts of meat called "London Broil." Those cuts can also be called flank or top round. Top round is not a kosher cut of beef so you are probably being sold a flank steak.

Why is London Boil tough?

A lot of London Broil recipes can come out tough if they are not cooked correctly. The cuts sold as London Broil are generally leaner cuts of beef without a lot of intramuscular fat and can dry out if they are overcooked. This recipe cooks the meat low and slow with plenty of liquid which helps to keep it moist and juicy.

Storage could not be easier. Crock Pots are nice because they often provide their own storage solution. Let the meat and sauce cool and then just put the lid back on and refrigerate for up to 4 days.

If you are trying to save space in your refrigerator, you can pour the juices from the Crock Pot into an airtight plastic bag and place the leftover meat inside as well. This will keep the London Broil pieces moist and tender. Refrigerate for up to 4 days or freeze for up to 6 months. 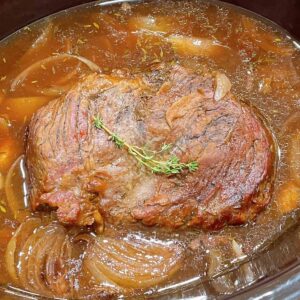