I have been making this Kosher Spaghetti Bolognese recipe for years. Also called spaghetti alla bolognese, this is one of those food recipes that is so quick and easy that I make it all the time. Family friendly and super yummy. This recipe is kosher, non-dairy, soy free, and can be made vegan with one small adjustment. Read on to learn how to make the best Spaghetti Bolognese from scratch with this simple recipe.

What Is In Kosher Spaghetti Bolognese?

There are many recipes floating around out there for an authentic recipe of spaghetti bolognese, which can also be referred to as a ragu. A traditional spaghetti Bolognese recipe contains milk. Obviously, for kosher reasons, we do not use milk in our recipe but I have found pareve milk like plain almond milk or soy milk works fantastically. Just please do not make the mistake I once made: be absolutely certain your pareve milk is not vanilla flavored!! That really screws up the spaghetti Bolognese taste. This recipes calls for wine which I know is something not everyone likes to cook with. It is not absolutely necessary to use the wine but it does add so much depth of flavor to the sauce, I highly recommend you use it. The alcohol of the wine is completely cooked out of the final product. Some recipes call for balsamic vinegar but this one does not.

This Recipe Is Healthy

When looking at a sauce as rich and deep in flavor as this one it is usually assumed that it is also fatty and unhealthy. This could not be further from the truth. Most of the fat comes from the ground beef and a lot of that fat is removed before the final sauce is put together. It is also ok to use a leaner ground beef or ground turkey for less total fat.

Other than the meat, the rest of this dish is vegetables and pasta. One of the nice things about a bolognese ragu such as this one is, due to the long cooking time, it is more of a very thick sauce or stew consistency. It is easy to increase the amount of vegetables in the sauce and into your meal. In a pinch, the long simmering time can be skipped but to get the most out of this rich delicious meat sauce recipe, you absolutely should try cooking this sauce for its entirety.

Where does Spaghetti Bolognese get its name?

Interestingly enough, the Italian bolognese recipe has very little (if any) tomato sauce, tomato paste, or tomato ingredients at all. It is thought that the tomato was introduced to the recipe after it left of Italy.

Is there an official Spaghetti Bolognese recipe?

The Italian Academy of Cuisine published its official recipe for spaghetti Bologna in 1982 and it contains no tomato at all. Despite this, there is no real consensus as to the "real" spaghetti alla bolognese recipe and variants are found all over the world (a lot of them use tomatoes just like ours).This information comes from wikipedia but my dad who was a chef and does a lot of business in Italy and speaks fluent Italian has corroborated it. 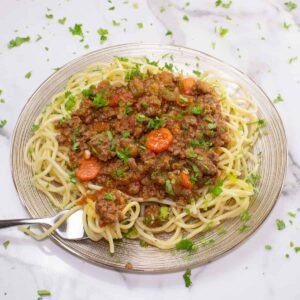 *Wine can be left out, if preferred, but the cooking at high heat does cook out all the alcohol.  **If you're in a rush, once the meat sauce is thoroughly cooked it is ready to eat but allowing to simmer over hours creates a much richer, more flavorful and delicious dish. Serving Suggestions

If you like this recipe, make sure to check out: