This recipe for Quick and Easy Israeli Salad is the perfect compliment to almost any main dish. Use fresh cucumbers and tomatoes to make a tasty side for dishes like Chicken Marsala or our No-Boil Baked Ziti. As with most salads, the fresher the ingredients, the better the salad. This recipe is kosher, pareve, vegan, and gluten free. Read on to learn how to make the best Quick and Easy Israeli Salad recipe.

This food is the national salad of Israel

If you have ever been to Israel (or if you live in Israel) then you are no stranger to pita and Israeli salad. It is served in every Middle Eastern Israeli restaurant from high class dining to the shawarma stand on the street corner. It seems like you can't order a plain hamburger in Israel without a scoop of that heavenly tomato and cucumber salad showing up somewhere on your plate. It is also common to see Israeli served with breakfast, lunches, or dinners when dining at home.

Why this recipe works

There are a lot of different styles of Israeli salad, this recipe is just for the basic salad. Here is what you need to make a quick and easy Israeli salad:

How to make Israeli Salad step by step

Step 1 - Cut and salt the tomatoes.

Cut the tomatoes into cubes about ⅓ inch thick. If you are using cherry tomatoes, slice them in half and use 2 cups. Salt the tomatoes and let them sit for about 5 minutes. The salt draws a lot of liquid out of the tomatoes and you want to dump that out before mixing them into the other ingredients.

Cut the cucumbers into cubes about ⅓ inch thick.

Step 3 - Mix in the parsley and onions

Mix the parsley and onions into the cucumbers.

Step 4 - Stir together the ingredients of the Israeli Salad

In a large bowl, stir in the tomatoes, orange peppers, lemon juice, and olive oil.

Why is it called Israeli salad?

Also called salat yerikot yisraeli, or Arab salad, Israeli salad refers to a dish that has lots of different variations, but generally includes cucumbers, tomatoes, and onions. This combination of chopped veggies has been touted by some as the "national dish of Israel" since you can find it everywhere in Israel.

Do I need to peel the cucumbers?

If you are using the Persian or English cucumbers, you will not want to peel them. The peel on these cucumbers is thinner and does not have a distinct flavor that would need to be discarded. If you are using the larger American cucumber you should peel them because the peel is waxy and has a bitter taste that is not good for this salad. Obviously, peeling the cucumbers will add some time to the preparation of the salad.

How can I store Israeli salad?

Just put the leftover salad into an airtight container and stick it into the refrigerator. It should keep 3-5 days. When you serve the Israeli salad after it has been sitting for a little bit, the tomatoes release a lot of water and you should pour some of it out before serving.

Can I freeze Israeli salad?

No. Tomatoes and cucumbers do not freeze well and will get mushy when they thaw. They will not taste fresh and freshness is really the whole appeal of this salad.

Israeli salad is low carb and full of flavor. This is the kind of salad that has something in it that everybody likes. In case you are looking for something different, here are some of our favorite additions: 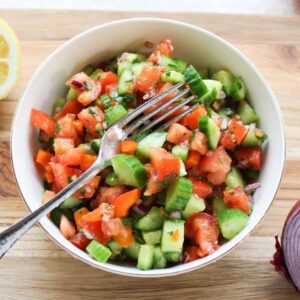 Israeli salad is low carb and full of flavor. This is the kind of salad that has something in it that everybody likes. In case you are looking for something different, here are some of our favorite additions: