After all of the yummy fried foods we eat on Hanukkah it is nice to have an baked potato latkes recipe that is a little more...let's say...less greasy! These latkes are baked and not fried which means that you use your oven to bake them instead of a pan of hot oil. Don't think for a second that these baked potato latkes play second fiddle to their fried cousins, these are just as good.

When To Serve Baked Potato Latkes

Make these oven baked potato latkes as a break from frying latkes or sufganiyot. You can use them in the same way and even try the same toppings that we suggested in our crispy potatoes latkes recipe. These are also great as a side dish or as a main dish for Passover.

They're Baked But Are They Still Crispy?

Don't worry, baked does not mean soggy. These latkes can turn out just as crispy as the fried latkes but the oven does the work, not the oil. One thing I like to do is turn on the broiler for 1-2 minutes right at the end of the cooking time. This will provide heat from the top of the oven and give the latkes their signature crispy finish.

Where I come from...Wisconsin...signature breakfasts always come with a potato dish. These baked potato latkes are similar to the hash browns that are usually served with eggs or pancakes. The soft and fluffy insides of the baked potato latke go very well with any number of breakfast egg dishes such as omelettes and sunny side up eggs. Take a few leftover of these oven baked potato latkes and toss them into the same pan used for making your favorite egg dish. Use a medium-low flame for about 5 minutes and they will come out just as crispy and fluffy as the night before. 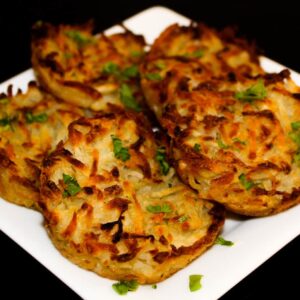 Many people find this recipe works best using disposable aluminum muffin tins.  Latkes can be made ahead and frozen in freezer bags. Warm in the oven to reheat.  Recipe from nowaythatshealthy.com