This recipe for Baked Pears with Cinnamon looks beautiful on a plate. Not to mention that it is super easy to make and is a healthy dessert option. This recipe for Cinnamon Baked Pears is kosher for Passover, gluten free, dairy, pareve, and nut free.

We love this recipe for Baked Pears with Cinnamon because it is:

How to make Oven Baked Pears with Cinnamon step by step:

This recipe is quick and easy and just like our 3 Ingredient Roasted Asparagus or 3 Ingredient Cranberry Sauce, this one does not require much from the kitchen. Here is how you make Oven Baked Pears with Cinnamon

Slice the pears down the middle lengthwise. Remove the stem and core from the middle using a teaspoon or melon baller if you have one. Place the pears skin side down into a 9x13 baking dish. You can squirt a little lemon juice over the tops if you are concerned about them turning brown.

Sprinkle cinnamon generously over the tops of the pear halves. You can use pre ground cinnamon or you can grind your own from a cinnamon stick for a fresher and more potent cinnamon flavor. If you are using any of our serving suggestion additions, add them here.

Step 3 - Bake the Cinnamon Pears in the oven

Bake at 375ºF for 25 minutes total time. You know the pears are done when you can sink a fork into one without too much resistance. Make sure not to over bake the pears or they will turn into mush.

How to store Cinnamon Baked Pears

Here are two ways of storing Baked Pears with Cinnamon for later:

An article about the health benefits of pears found on eatingwell.com reports that pears are a healthy food because they are: 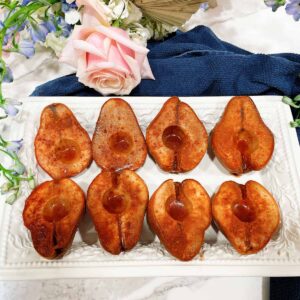